Mr Hollande and Mrs Merkel are taking to Moscow a peace proposal crafted in the Ukrainian capital Kiev on Thursday, but details have not been released.

Meanwhile a truce has allowed civilians to leave Debaltseve, at the heart of the latest fighting in eastern Ukraine.

Russia is accused of arming pro-Russian separatists — a claim it denies.

The Kremlin also rejects claims by Ukraine and the West that its regular troops are fighting alongside the rebels in the eastern Donetsk and Luhansk regions.

A September ceasefire, signed in Minsk in Belarus, has failed to stop the violence. Since then the rebels have seized more ground, raising alarm in Kiev and among Ukraine’s backers.

This may not be the last attempt to try to find a peaceful solution to the hostilities in eastern Ukraine, but there is a sense that the door is closing fast.

On Thursday German Foreign Minister Frank-Walter Steinmeier said the West must see if there was still a chance to reach a settlement, before there was «complete loss of control» over the conflict. France’s President Francois Hollande has said diplomacy could not «go on indefinitely.»

That Angela Merkel is travelling to Moscow can be seen as a positive sign — the German chancellor said she wouldn’t meet Vladimir Putin without the concrete prospect of progress.

But the roadblocks to a final peace — or even a lasting ceasefire — are formidable and many. Not least is the low level of trust among Ukrainian and Western officials for any promises coming from the Kremlin.

Mr Putin may be sincere in his peace proposals; or, many in Kiev and other capitals feel, he may just be buying time.

Before he left for Moscow on Friday, Mr Hollande said the goal of his visit was not just a ceasefire, but a «comprehensive agreement» — though Mrs Merkel said it was «totally open» whether that could be achieved.

Meanwhile US Vice-President Joe Biden accused Russia of «continuing to escalate the conflict» and «ignoring every agreement».

He was speaking in Brussels, where he is meeting top EU officials. 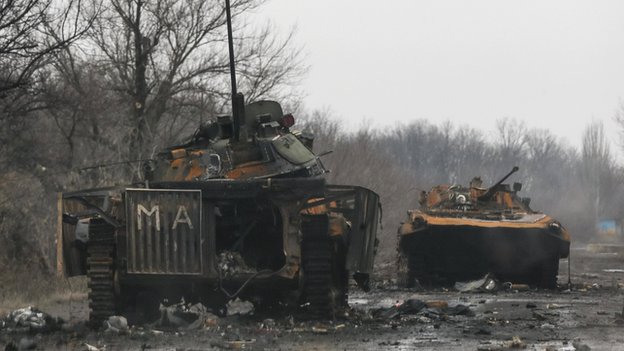 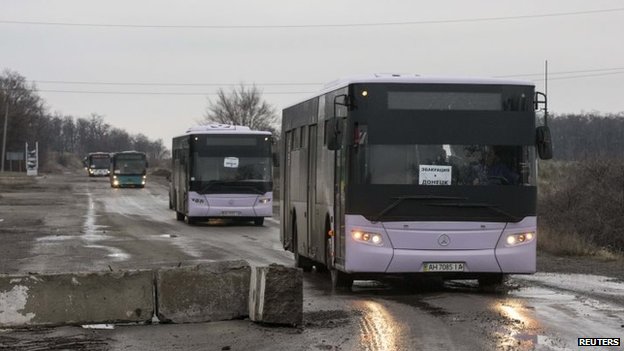 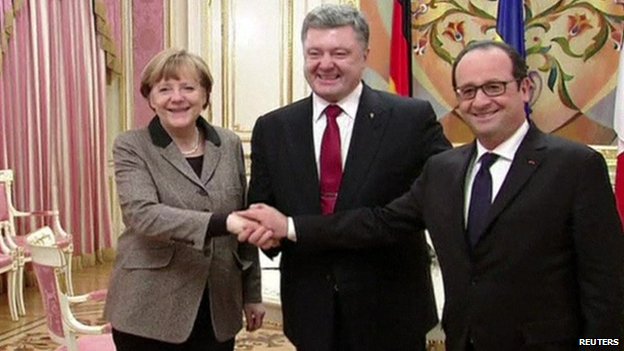 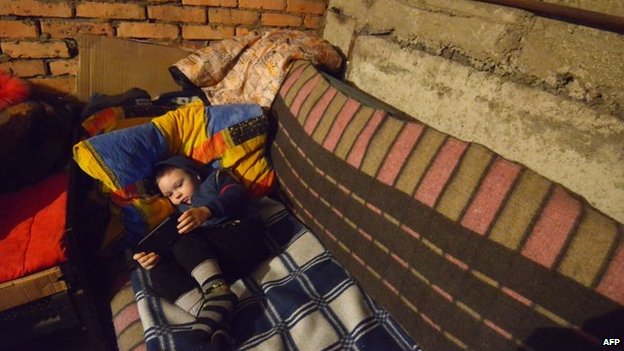 Along the frontline of the fighting, such as here in Donetsk, civilians caught in the crossfire take shelter underground and in their flats, often lacking food, water and power

He accused Mr Putin of continuing «to call for new peace plans as his tanks roll through the Ukrainian countryside».

He said Russia could «not be allowed to redraw the map of Europe».

Ukraine is also set to dominate an annual multi-lateral security conference in Munich.

The fighting has intensified in recent weeks after a rebel offensive, and a temporary truce was declared in Debaltseve on Friday, where Ukrainian forces are fighting to hold the town against surrounding rebels.

Convoys of buses travelled to the town on Friday to evacuate civilians who had been forced to shelter underground from the bombing.

They were escorted by monitors from the OSCE security watchdog, reported Reuters news agency.

Washington is considering Ukrainian pleas for better weaponry to fend off the rebels, raising European fears of an escalation in the conflict and spurring the latest peace bid.

On Thursday Mr Hollande and Mrs Merkel examined the peace proposal with Ukrainian President Petro Poroshenko, without releasing any details.

Major questions any plan would have to address include the route of any new ceasefire line — given the rebel advances of recent weeks — how to enforce it, and the future status of the conflict zone, says the BBC’s Sarah Rainsford in Moscow.

Moscow says it is ready for «constructive dialogue» — though still denying any direct role in the conflict — while Kiev insists above all that Ukraine must remain united, our correspondent says.

A spokesman for the Kremlin said Mr Putin would discuss «the fastest possible end to the civil war in south-eastern Ukraine».

Some 1.2 million Ukrainians have fled their homes since last April, when the rebels seized a big swathe of the Luhansk and Donetsk regions following Russia’s annexation of Crimea. 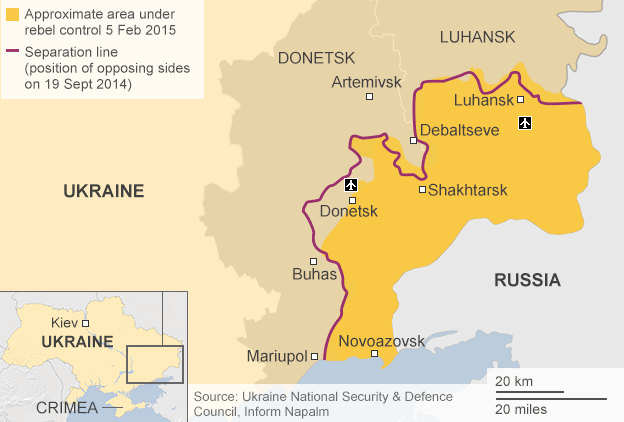